It has been a while since I wanted a polish really badly that I couldn’t find anywhere! Usually ebay has it, or amazon, or e-crater.

I saw the new Pure Ice – Pardon My French on Leslie’s blog -> This post!

I want it so badly, and I figured I just had to go to Walmart! Well that’s easier said than done here because Walmarts are pretty far away from me, and since there are so few, they are so packed full of people who come from so many surrounding cities because its also their only one.

I got really excited when I saw my new job had a Walmart one mile away! So I drive to it, and the sign says it is opening at the end of November. Great, it was just built, so at least I *will* have a Walmart close by!

So I drive far as hell to the one that is open, and I happily run up to this:

That doesn’t look like the one Leslie posted, or Noveau Cheap, or anyone else with a Walmart trip picture! haha! I’m crossing my fingers that when the new Walmart opens in a couple of weeks that it’ll have the new display!

Okay, so I’m moving this week and my server will be on a moving truck yet again. I’m not even going to have internet in the house for a week or so actually.

Damn them, this sucks! Here are some other options for us!

First of all, to keep up with your blogs, NetVibes has always been what I use! I love it to death!

You can customize it, but here is a screen shot of mine… 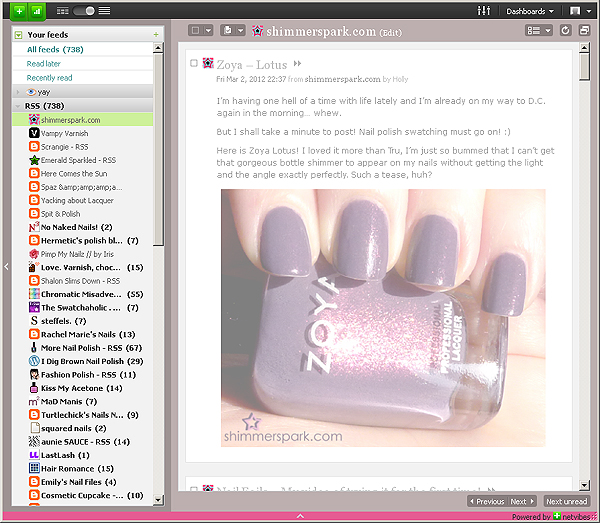 (Sorry to those on the left there who have a few unread… I’m still catching up from my trip!)

Are there others that you think are good? If so, let me know!

HelloCotton has a friend widget now too! Look on my right sidebar:
Join shimmerspark.com on Hellocotton

FriendFeed – Also has a widget, on my right sidebar:

Linky Followers – See widget on my right sidebar:
This one is a lot like GFC only with even more options! I’m liking it…
http://www.linkyfollowers.com

Here are other social networking sites I am on. Do any of these have widgets yet?

This one is SO awesome! I love that its a work-friendly polish too because all of the colors it flashes to are normal colors like purple, red, plum, magenta… so I can wear it all I want without wondering if it’ll be appropriate in a meeting with military folks and everything. 🙂

At the least red angle, it looks like a dark plum purple. I just think this is so gorgeous.

So either I’ll have to figure out another change, or a lot of us bloggers are on wordpress and we’ll all move to bloglovin’ instead anyway?

If so, I added bloglovin’ following on my sidebar so we can get going with that. I’ll look for yours on bloglovin’ too so I can add yours there.

I love how this one shows your follower count, although right now mine is 6 so its a sad little cute number. haha

(Just when I thought wordpress.org gave us all complete freedom! Argh.)

I keep wanting to make a “My favorite things” video for you guys and see what yours are so I don’t miss out on other awesome stuff… I was going to include nail products but also hand and cuticle stuff and even fragrance, hair products, eye shadow and lip gloss. I’ve never even made a video that shows my face! Maybe I won’t be such a stranger. 🙂

Oh, I had SUCH high hopes for using the Bundle Monster plate BM 220!

As soon as I got it, I couldn’t wait until winter to use it. I ended up making quite a mess instead of the cute little peppermint tips I kept dreaming up. haha!

I did a coat of white first, then put some red over it (Rimmel Rapid Ruby) and stamped with the Konad white, so that the red would show through the gaps. It just didn’t show up as cleanly as I thought it would. Then I tried to go back over the messed up spots with white. When I tried to clean up the smile line with the brush, the red started kind of bleeding out of the bottom too, so I finished it up with the white line.

It was still a mess so I thought putting a coat of the Sally Hansen Diamonds would help since its just clear glass fleck and might smooth it out a little?

Ugh, I hope to be able to do this again and have it look like a lot less of a mess. 🙂 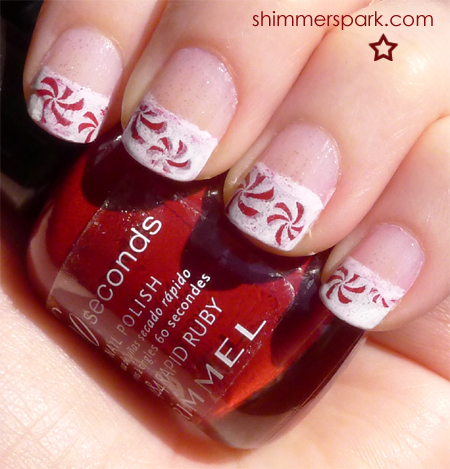 I think I made the comments functionality a little better last night… it will either give you a confirmation (if it remembered your identity from last time you commented), or it will at least say that it was posted and you have to refresh to see it. I hope that helps!

This swatch is Lolly and Mitzi from the Mod Mattes that Zoya released for summer. Phoebe was the other one, which I already swatched.

I don’t know, I just can’t let these two grow on me. They are just kind of an ugly shade of magenta and green, or at least on my skin tone! I did love Phoebe and I’m keeping that one, but I just can’t seem to like these! 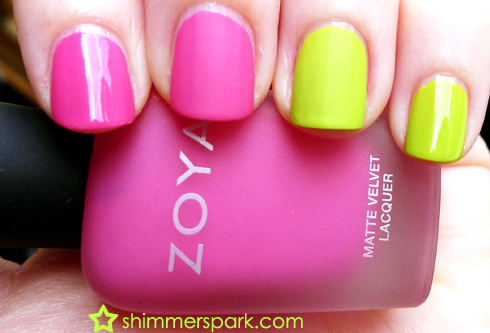 I did used to love some ugly 70s colors like burnt orange and avocado green (like grandma’s kitchen wallpaper!) but this green is like… well, I have parakeets and I’m always cleaning up their poop, and its that kind of green. haha!!

What do you guys think of that collection?

This one looked really bad on me although I LOVE the color of the actual polish. I almost didn’t want to bother posting the swatch, but it didn’t look so bad when I stamped on it with the American Apparel’s Coney Island pink to make it stand out a little more… 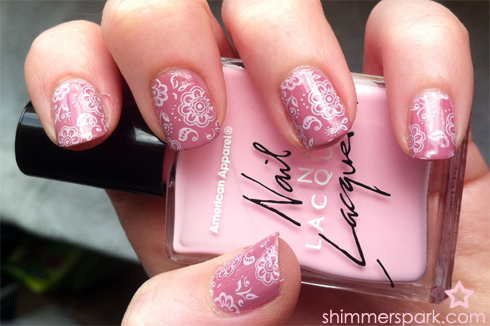 Here is the swatch by itself. Eeek, melds too much with my skin tone and looks a little too grandma-ish! 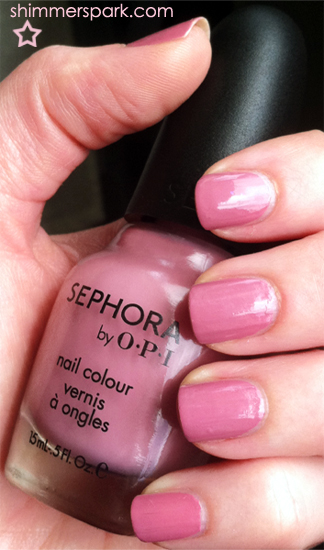 I wish it worked on me because I really do love vintage rose mauves like this. I’ll swap it to someone who can make it look prettier. 🙂

I’d like to point out that American Apparel – Coney Island is a really pretty pastel pink and it stamps SO well!

This is another Chanel that looks so much more rich and shimmery in the bottle than it does on my nails. I hate when you see this polish in the bottle that is just something you want so badly and then when you put it on, you don’t see what you hoped to see.

In the shade it just looks like metallic glossy black… 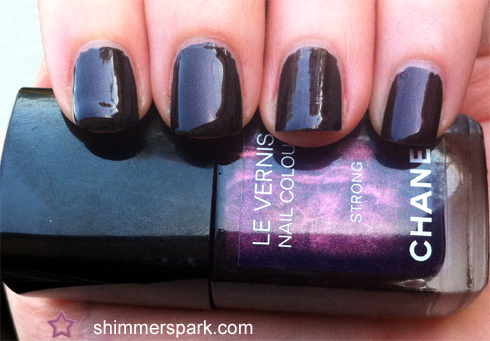 In the sun you can see some raspberry purple, but just barely. Look at the bottle though! 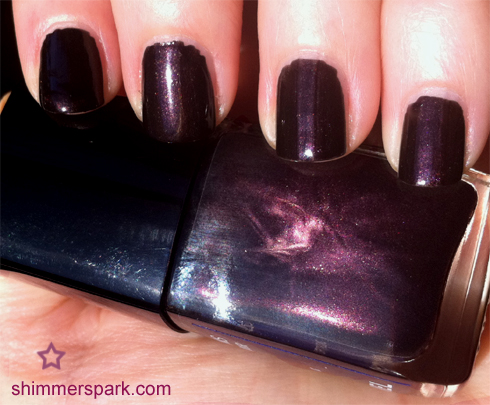 Ah, what a tease. Chanel, you’re a big tease! I know a lot of people love this one though, so maybe its just me.

This one is just so gorgeous where the sun hits it very directly, but other than that it just looks like plain glossy black. I’m so sad, I wish it looked that way all the time! Don’t you just love where the sun does directly hit it? 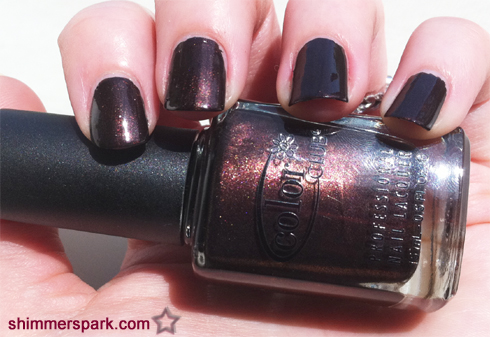 This one was a real dud for me… CHI – Love That Milky Way. I’m sure its a great formula because it goes on well and is opaque in 2 coats. Its really shimmery, its just like light taupe with light silver/taupe glitter. That translated to a big blah on my nails. 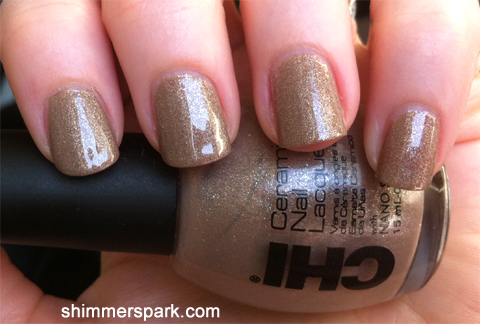 Disliked them both in different ways, but we can’t always love the ones we order can we!?

This is one of the colors I wish OPI would bring back. Its my favorite kind of polish because its another mauvey brown with shimmer that looks different at different angles. Unlike China Glaze Delight though, it has a plummy color at a certain angle, kind of like Dior Aztec Chocolate did.

It looks really awesome on longer nails too BTW! 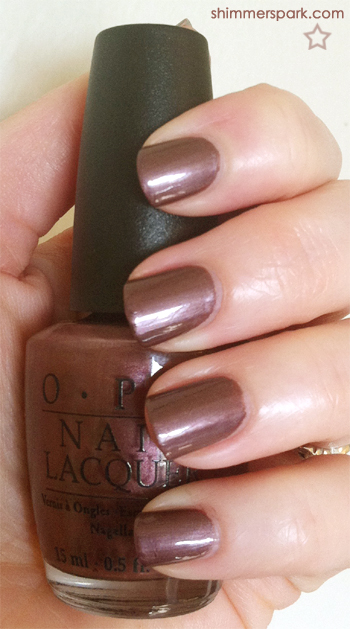 Its pretty hard to find, and the people on Ebay know it too, so the price is usually pretty high!

So this morning, I put this polish on, and I had just gotten Nubar’s Diamont top coat from them, so I thought I’d give that a shot instead of Seche Vite. BAD idea. It claims to be a fast drying hard top coat like Seche Vite so I thought I could trust it, but even 15 to 20 minutes later, it was so soft that when I was getting ready for work, it just totally screwed it all up.

I didn’t have time to re-do anything and didn’t want to walk around with such horrible gloppy smudges in my polish, so I just covered it up with that Del Sol Flirt really quickly! (And Seche Vite this time!)

It worked like a charm, and now I gotta show you how cool it looked on top of it. In the shade, it just kind of gave it a white shimmer…

But then look how awesome it looks in the sun!! 🙂

That stuff is fun!

Nothing will mess up not-quite-dry nails like buttoning your jeans and pulling on socks and shoes!