This is one of the colors I wish OPI would bring back. Its my favorite kind of polish because its another mauvey brown with shimmer that looks different at different angles. Unlike China Glaze Delight though, it has a plummy color at a certain angle, kind of like Dior Aztec Chocolate did.

It looks really awesome on longer nails too BTW!

Its pretty hard to find, and the people on Ebay know it too, so the price is usually pretty high!

So this morning, I put this polish on, and I had just gotten Nubar’s Diamont top coat from them, so I thought I’d give that a shot instead of Seche Vite. BAD idea. It claims to be a fast drying hard top coat like Seche Vite so I thought I could trust it, but even 15 to 20 minutes later, it was so soft that when I was getting ready for work, it just totally screwed it all up.

I didn’t have time to re-do anything and didn’t want to walk around with such horrible gloppy smudges in my polish, so I just covered it up with that Del Sol Flirt really quickly! (And Seche Vite this time!)

It worked like a charm, and now I gotta show you how cool it looked on top of it. In the shade, it just kind of gave it a white shimmer…

But then look how awesome it looks in the sun!! 🙂

That stuff is fun!

I feel like such a dork being so excited about these, because I used to pass them up… but I saw them at our new Walgreen’s and grabbed 3 of them for $10.

This one is Flirt. It seems a little boring without sun, but at least its a nice shimmer with white reflection so it looks clean. This picture kind of shows my yellowy nail underneath though, eek! Maybe next time I’ll wear it over white.

So in the shade, when you get a tiny bit of sun, it starts to look a pretty peach-ish pink… 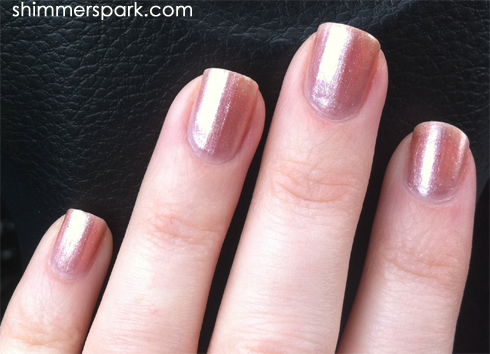 But then in the sun, it is an awesome metallic shimmery pink! And it got so dark that I have no visible nail line anymore!

The others I have are First Kiss and Ruby Slipper so those will come later.