A lot of people say that these are close to being dupes. Sometimes I’d see swatches of them together and they did look similar so I was confused and had to do it myself! Plus, I wanted to show the awesome missgreencurry, who sent me Space Cadet. 🙂

I know they have a similar eggplant to olive type of effect, but to me they always looked pretty different. My swatch really showed how different they are.

Space Cadet on index and ring fingers, Venemous on middle and pinky: 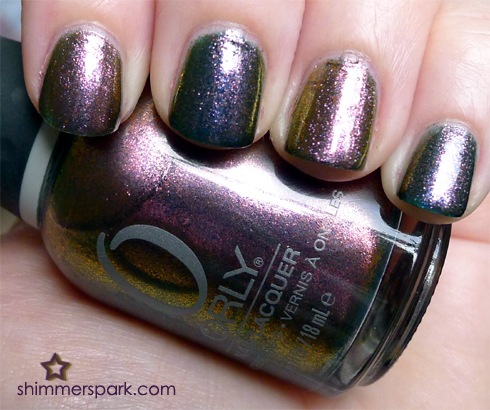 They look awesome in the bottles!

I guess if you love duochrome that has a purple to green shift, then these are both similar and both awesome, so I can see the comparison, but some swatches like this one from stephscloset make them look like almost exact dupes, that’s where I got confused. Maybe at a certain angle they do look alike!

If you want to see some awesome close-ups of Space Cadet, I love this post on lacquerized.com! (Her blog is sooo amazing by the way if you haven’t seen it, I always thought her pictures and swatches were the best quality by far!)